Major Oak Chorus is proud to have the following quartets associated with our chorus.  We endorse all of them as excellent singers and entertainers, suitable for any occasion... 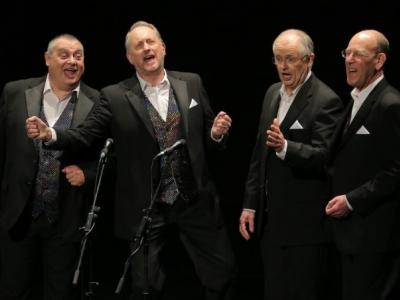 QM have vast experience at singing in a variety of venues from contemporary music clubs to concert halls in Nottingham and further afield. They specialise in entertaining at concerts, festivals, both charity events and corporate events and celebrations of any kind.

You may have seen them around the city singing at the Hockley Hustle, the Space at The Contemporary, Wollaton Hall, The Council House, The Maze, Jam Cafe, Sobar or recently on Notts TV. Oakie Dokie are members of The MOCtet, and first sang together as a quartet at a Movember ritual shave-off at The Worlds End, Lowdham, in November 2013.  We have sung together regularly since, in private and at a number of public performances, for example to a party hosted by The Lord Lieutenant of Nottingham at his home, Caunton Hall.

.Here is a photo of us winning the quartet contest at the Lincoln Music Festival in 2019. Videos of us are on Facebook – search for Oakie Dokie Musician / Band

While we are happy to accept payment for our music, which we spend on new music and coaching, we also support worthwhile local charities by performing without charge.